Allegiant Travel (NASDAQ:ALGT – Receive Rating) is scheduled to announce its earnings results after the market closes on Wednesday, February 1st. Analysts expect the company to post earnings of $0.75 per share for the quarter. Allegiant Travel set its Q4 2022 EPS guidance. Investors interested in registering for the company’s conference call can do so using this link.

Allegiant Travel (NASDAQ:ALGT – Get Rating ) last announced its quarterly earnings data on Wednesday, November 2nd. The transportation company reported ($0.54) EPS for the quarter, missing the consensus estimate of ($0.47) by ($0.07). Allegiant Travel had a negative net margin of 1.80% and a positive return on equity of 1.68%. The business had revenue of $560.33 million during the quarter, compared to the consensus estimate of $556.65 million. On average, analysts expect Allegiant Travel to post $1 EPS for the current fiscal year and $6 EPS for the next fiscal year.

In related news, CMO Scott Wayne Deangelo sold 1,250 shares of the firm’s stock in a transaction dated Tuesday, January 3rd. The shares were sold at an average price of $69.37, for a total transaction of $86,712.50. Following the sale, the chief marketing officer now directly owns 15,106 shares of the company’s stock, valued at $1,047,903.22. The transaction was disclosed in a filing with the SEC, which can be accessed via this hyperlink. Corporate insiders own 15.10% of the company’s shares. 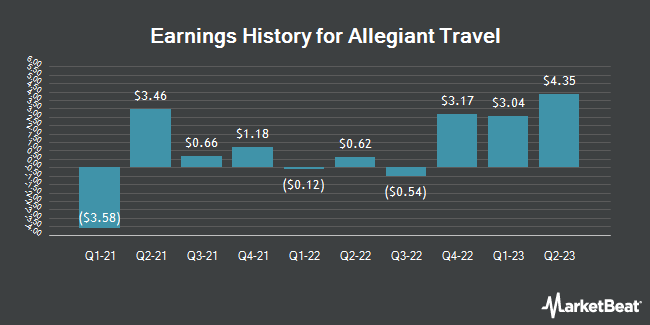 This instant news alert is generated by narrative science technology and financial data from MarketBeat to provide readers with the fastest and most accurate reporting. This story was reviewed by the MarketBeat editorial team prior to publication. Please send any questions or comments about this story to [email protected]

Before you consider Allegiant Travel, you’ll want to hear this.

MarketBeat tracks Wall Street’s top-rated and top-performing research analysts and the stocks they recommend to their clients daily. MarketBeat identified the five stocks that top analysts are quietly whispering to their clients to buy now before the broader market takes a nosedive … and Allegiant Travel wasn’t on the list.

Although Allegiant Travel currently has a “Hold” rating among analysts, the top-rated analysts think these five stocks are better buys.

Check out the five stocks here